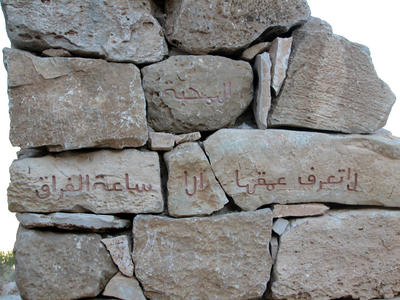 "Love knows not its own depth until the hour of separation"

(Engraved on the stairway leading to the Monastery of Mar Moussa)
.
Thanks to my fellow Syrian bloggers for a great evening yesterday.
.
Update: I just knew that this is a quote from Gibran Khalil Gibran's "The Prophet". I pasted above the original text instead of my translation.
Posted by Ayman Haykal at 8/30/2005 01:11:00 am 25 comments: 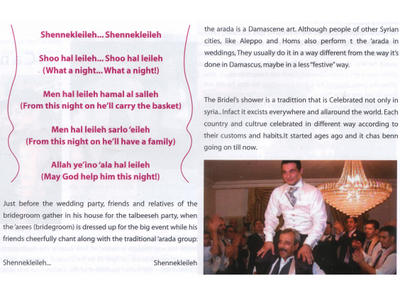 Without acquiring authorization or giving credit, the English version of Layalina Magazine has copied and pasted a post from the Damascene Blog in its latest edition. The Magazine also republished the picture in that same post and did not bother to mention the source anywhere in the article that carried the signature of the Magazine's managing editor.
Posted by Ayman Haykal at 8/26/2005 06:22:00 pm 29 comments: 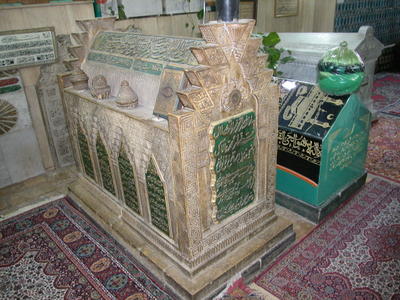 The empty tomb of Algerian national hero Abul Qadir Al-Jazairi (1808-1883), leader of the famous rebellion against the French invasion of Algeria in the mid-19th century. After losing several battles against Abdul Qadir, the French had to bring more enforcements into the country and practiced a scorched-earth policy to terrorize the population. Abdul Qadir was forced to surrender in 1847 and was later exiled to France. He remained there until 1852 when he moved to Bursa, Turkey, and then to Damascus in 1855.

In Damascus, he devoted himself to teaching and writing, and quickly gained popularity and respect among Syrians. In 1860, when sectarian violence broke out in Damascus, he provided refuge for more than 15,000 Christians who escaped the fighting, and helped to bring back peace and calm. He died in 1883 and was buried in the Mosque of Ibn Arabi in Damascus. 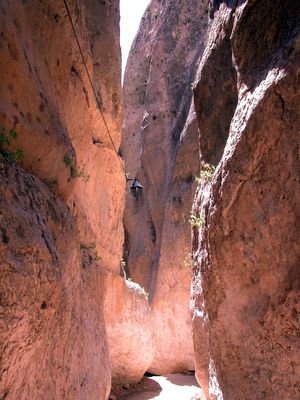 Maaloula is a small mountainous village located 50 km to the north-east of Damascus. It is famous for being one of the very few places in the world where people still speak Aramaic, the language of Jesus Christ. One of the highlights of Maaloula is the Fajj (gorge), a split that cuts through the mountains of Maaloula forming a beautiful narrow corridor. It is believed that the fajj is related to the story of St. Thecla (Arabic Taqla), the first girl martyr in Christianity. After converting to Christianity, Thecla was prosecuted by her family and by the Roman authorities. She was being chased by Roman soldiers when she faced a huge mountain, a dead end with no chances for escape. She prayed to God to save her and her prayer was miraculously answered when the rocks were split, forming a narrow passage: The fajj. This is where the village probably derives its name from; the word Maaloula in Aramaic means 'entrance'.
Posted by Ayman Haykal at 8/11/2005 03:25:00 pm 15 comments:

I got this from a friend:

I'm currently doing some research for my Masters about blogging in Lebanon, Syria and Jordan at the University of Westminster. I've just designed a questionnaire and would be grateful if you could fill it on (its for anyone of the above origins or living in these countries). It only takes about 8 minutes.

All your responses and any comments will be treated with the utmost confidentiality. The results of this research should be very exciting and, by the end of august, I will be sharing them with everyone. If you have questions at any time about the survey or the procedures, you may contact, myself, Maha Taki on +44(0)7916161035 or email me at the email mahataki(at)gmail.com. 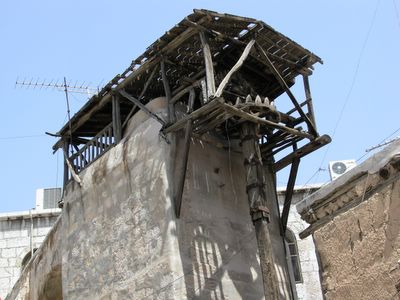 The oldest and only surviving waterwheel in Damascus is in As-Salhieh district on the slopes of Mount Qassiyoun. This water-raising device dates back to the Ayubid era and was designed by Badi' Al-Zaman Al Jazari
Posted by Ayman Haykal at 8/03/2005 12:08:00 pm 17 comments: