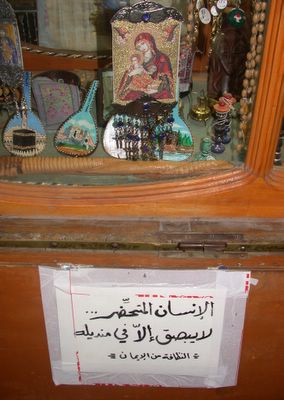 Words of wisdom on the show window of a souvenir shop in Aleppo:
"A civilized person only spits in his handkerchief! Cleanliness is part of faith." 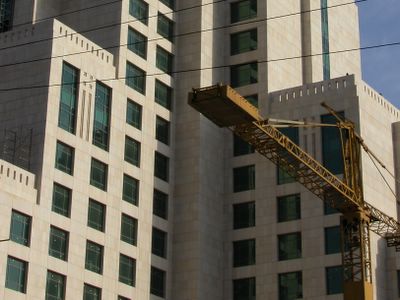 It was announced today that construction works of the Four Seasons Hotel have been completed and that the Hotel will officially open next summer. There has been a lot of controversy in Damascus about the Hotel, which is 65% owned by the Saudi Billionaire Al-Walid Bin Talal, 17% by the Governorate of Damascus and 17% by the Ministry of Tourism:

( - ) Many feel that the building's design does not fit the area. Towering in Shukri Al-Quwatli Street and overlooking Barada River and the historic Tekiyyeh Mosque, the huge block of glass and marble now dominates the skyline of central Damascus. Some have complained about the fact that the hotel consumed a large part of Al-Menshieh Park and surrounded the eight-century-old dome covering the tomb of Faroukh Shah, the nephew of Saladin.

( + ) This is going to be the largest hotel in Syria and the first five-star hotel to be opened in Damascus in nearly 2 decades. In addition, the new Hotel occupies an advantageous "strategic" site in the heart of Damascus. It will boost the tourist industry in the country and create an atmosphere of competition that will result in better tourist services. The building looks great, especially when lit at night; it gives a touch of modernity to the center of the nation's capital, the home to an estimated 5 million people.
Posted by Ayman Haykal at 2/26/2005 07:54:00 pm 15 comments: 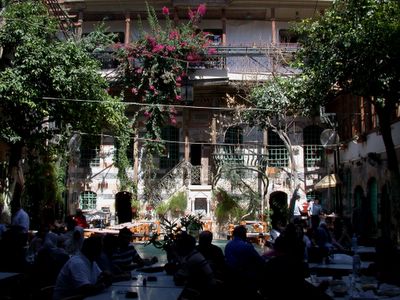 A no-longer-new trend in Damascus is opening restaurants and cafes in restored traditional Damascene houses of the Old City. As well as making good money for investors, this helped to preserve many beautiful houses that were neglected for a long time and to breathe life back into the Old City. An example is Beit Jabri, an 18th-century house with 23 rooms that was turned into a restaurant in 1996. On Friday mornings, Beit Jabri is crowded with people who gather for a traditional Damascene breakfast of fatteh or tess'iyeh: A mixture of broken pieces of toasted pita bread and chickpeas, covered with a special sauce made of yogurt and tahini (sesame seeds paste) and served in two types: with olive oil or with samneh (ghee).
Posted by Ayman Haykal at 2/25/2005 12:29:00 am 9 comments: 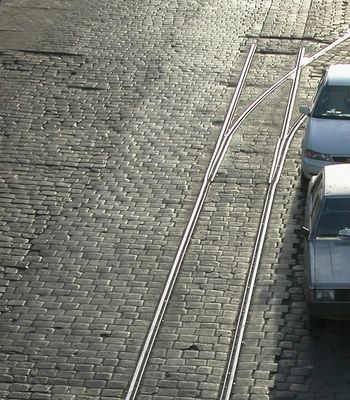 One of the last surviving pieces of the tramway rails that were laid in Damascus in 1907. It was the year when electricity was first introduced into the city by a Belgian-Turkish company and the tramway (pronounced in Damascus as tram-why) began to compete with carts as the main method of transportation. By 1931, the tramway had a network of 6 lines: Al-Midan, Al-Jisr Al-Abyad, Sheikh Muheddine, Muhajireen, Kassa' and Douma. The picture shows where the tramway used to turn right, after an exhausting day of carrying hundreds of people, to be parked inside the complex of the Electricity Company in Al-Mutanabbi Street. The last tramway to make this journey ran on these rails in 1961.

With the substitute now being the air-polluting, chaos-producing, uncomfortable micro-buses, many people in Damascus yearn for the tramway days and tell their children (or grandchildren) nostalgic stories about the jabee or commissiari and his wooden ticket box, the 7.5 eresh (Piastre = 1/100 Syrian Pound) they used to pay for the first class ride and the 5 they used to pay for the second class one. 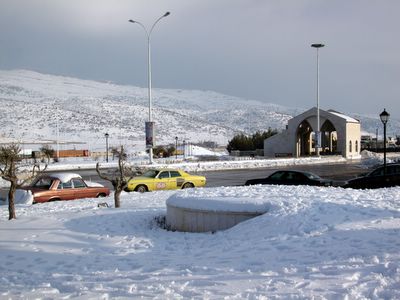 "For the past couple of days, the Syrian-Lebanese border has been witnessing one-way traffic. Thousands of Syrian workers 'fled' to their country, fearing strong Lebanese feelings against them on the background of the assassination of ex-prime minister Rafik Al-Hariri. Although racism against Syrian workers has always been there, it did not make up the whole scene like it does now [...] A quick visit to the Syrian-Lebanese border last Friday and Saturday is enough to draw a sad picture of how recent developments have affected relations between the two peoples"

To the people in the Lebanese media and opposition who are fueling hatred against Syria; to all the narrow-minded people who are insulting Syria, the country and the people, in the streets of Beirut: Picturing Syrian people as an enemy will only harm your cause and make you lose the sympathy and support of many Syrians. Even after the Syrian army withdraws, Syria will remain on Lebanon's doorstep, your neighbor till the end of time. Don't let filthy politics separate the two peoples. Don't cut new wounds that can take a long time to heal. 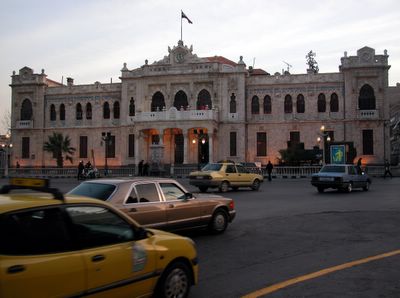 The Hijaz Station was erected in 1908 after the construction of the Hijaz Railway that connected Damascus to Mecca and made Muslim pilgrimage easier than ever before. The railway was used to supply Turkish armies during World War I so it was subject to destructive attacks by Arab rebels aided by Lawrence of Arabia in 1916. Although parts of it remained intact and still connect Syria and Jordan, the railway to Mecca (now in Saudi Arabia) was severely damaged during the Arab Revolt and was never reconstructed.
Posted by Ayman Haykal at 2/20/2005 01:20:00 pm 9 comments: 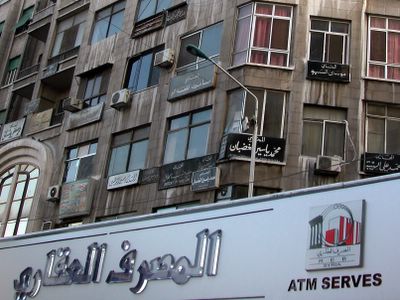 Although setup in an area of Damascus crowded with offices of sworn translators, the government-owned Real Estate Bank did not bother to hire somebody to check the spelling on this elegant signboard announcing its new ATM "serves".
Posted by Ayman Haykal at 2/19/2005 09:49:00 am 9 comments: 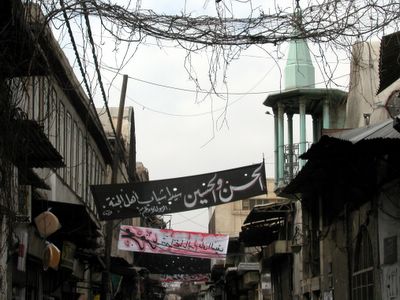 During this period of the Islamic year, Shiite Muslims celebrate 'Ashura, the anniversary of Imam Hussein's death in the battle of Karbala against the army of Yazid, the Umayyad Caliph of Damascus in the year 680. 'Ashura, the 10th of the Islamic month of Muharram, is the peak of 10 days of commemorative events that start on the 1st of Muharram. Black banners in praise of Hussein have been put up in Al-Ameen neighborhood of Old Damascus. This one reads: 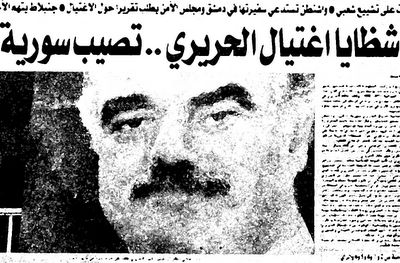 Gloomy weather in Damascus today. Nervousness is in the air. People woke up to listen to thousands swearing at Syria during Hariri's funeral. Yesterday Syrian workers were attacked in Sidon and a Syrian truck was set on fire. One mourner told Reuters: "I want to kill someone today -- a Syrian."

It's sadly funny how masses can easily be used as a mere plaything in a big dirty political game. Funny how a lie is repeated over and over until it becomes a common belief that nobody can/dares challenge.

With the US and Syria seemingly heading towards confrontation, many Syrians feel like the Iraqi scenario is being repeated. Did Syria kill Hariri? Find the answer here: Did Iraq really have weapons of mass destruction?
Posted by Ayman Haykal at 2/16/2005 02:20:00 pm 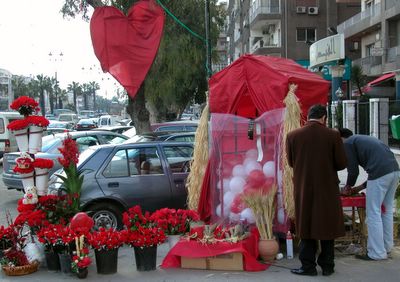 Be it cultural invasion, shallow commercialization of love or genuine celebration of it, Valentine's Day was "observed" in Damascus with flower and gift shops decorated in red and prices of red roses doubling several times. The day was spoiled by the news about the horrible explosion that killed ex-Lebanese prime minister Rafik al-Hariri in Beirut. Around noon, everybody was rushing back home to call friends and relatives in Beirut and to watch scenes of destruction in Beirut's beautiful Cornische, an area many Syrians know very well. May Allah bless Lebanon and spare it (and Syria) the consequences.
Posted by Ayman Haykal at 2/14/2005 04:56:00 pm 4 comments: 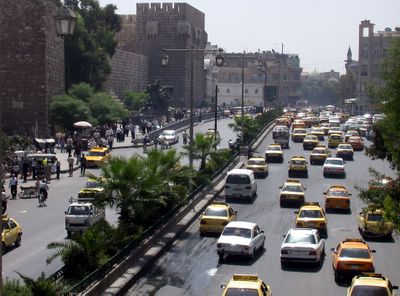 Rush hour in downtown Damascus, dominated by yellow cabs from different eras: 1983 Mitsubishi Lancer, Mid-1990s Daewoo Cielo and late-1990s Daewoo Matiz, newer but cheaper Skoda-Lada, Dacia and Turkish-made Sahin. Try to recognize the typical 1980s white Peugeot 504 with black curtains (the driver is probably a young army conscript and the owner is a low-ranking army officer) and the white Mercedes Benz E300 with a special number plate (high-ranking officer). The scene is not complete without the small white Suzuki carry pick-up, commonly known in Syria as Tertayra because of the "terrr.. terrr" sound it produces.
Posted by Ayman Haykal at 2/12/2005 02:36:00 am 6 comments: 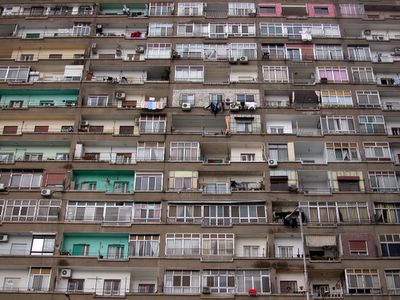 With no efforts made to enforce laws that do not permit people to selfishly damage the appearance of the buildings they share with others, this mess of a building is not an uncommon sight in Damascus. 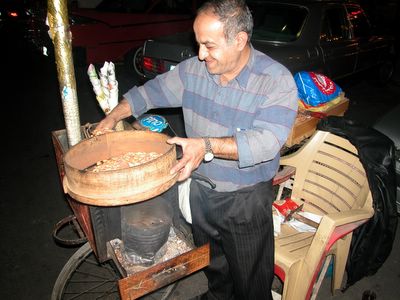 Before you go for a walk around Jahez Park or in the busy streets of Sha'lan, spare 10 Syrian Pounds to buy roasted peaunts wrapped in old newspaper. Delicious! 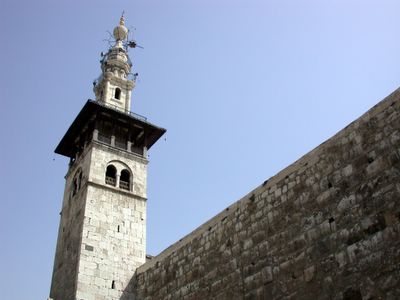 The Minaret of the Bride is the oldest and most beautiful minaret of the Umayyad Mosque. According to a 17th century historian, its name is attributed to the daughter of a Damascene merchant who was asked by the King to provide lead, a scarce material at this time, to cover the roof of the minaret. The merchant's daughter would not give him the material before he paid her the weight of the lead in silver, which he eventually did. Convinced that he was a man of his word, she donated the lead for free and agreed to marry the king. The minaret was thereafter given the title of the woman who provided the leaden covering: Al-Arous - The Bride. 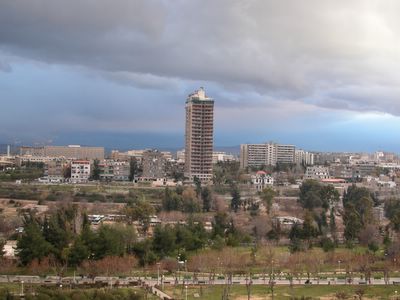 Modern Damascus: In the foreground is Tishreen Park, the largest and most visited in Damascus; in the background is Al-Mazzeh neighborhood with some of its landmarks: Al-Assad University Hospital, the Faculty of Medicine, the Faculty of Pharmacy and Damascus University dormitories. Also in the background on the far left is the still-under-construction building of the Ministry of Foreign Affairs in Kafarsousseh. 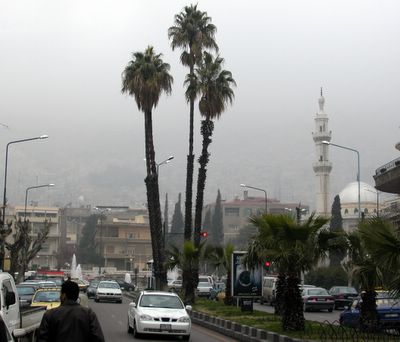 Mount Qassyoun and the blinking red light of its giant TV transmission tower disappeared behind thick fog that fell over Damascus today. The picture was shot in Abu Rummaneh Street near Rawdah Square. 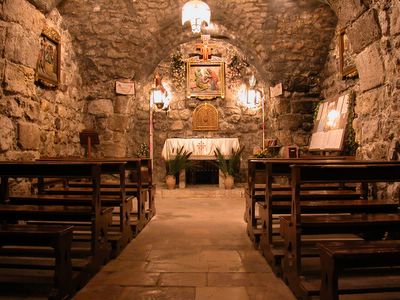 Now there was a disciple at Damascus named Ananias. The Lord said to him in a vision, "Ananias." And he said, "Here I am, Lord." And the Lord said to him, "Rise and go to the street called Straight, and inquire in the house of Judas for a man of Tarsus named Saul; for behold, he is praying, and he has seen a man named Ananias come in and lay his hands on him so that he might regain his sight. -- (The Bible, Acts 9:10-12)

Picture: The House of Ananias (Arabic Hanania) is located in Bab Sharqi, and now hosts a small chapel. 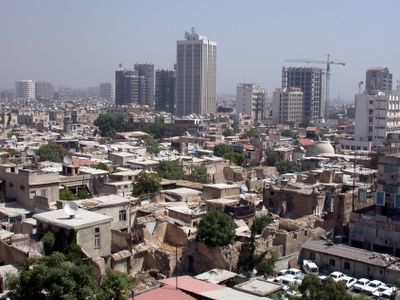 Souk Saroujah was the first neighborhood in Damascus to be built outside the city walls in the 13th century. Known as Damascus's "Little Istanbul," Sarouja contains some perfect examples of traditional Damascene architecture, including houses, mosques and baths. The neighborhood had to struggle against the merciless invasion of steel and concrete, and had already lost some battles when the Governorate of Damascus decided to declare it as a protected historical site and started to "think", along with the Ministry of Tourism, about renovating the ailing buildings and opening the area up to tourists.