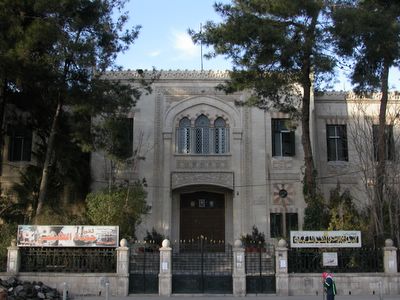 Al-Tajheez School was established in 1933 to replace Maktab 'Anbar as the main high-school in Damascus. It was later renamed after Jawdat Al-Hashimi (1887-1955), its founder and first director. The building was designed by the famous Lebanese architect Youssef Aftimos (1866-1952), who also architected the Beirut Municipality building and the clock tower at Beirut's Grand Serail.
Posted by Ayman Haykal at 3/30/2005 01:37:00 am 8 comments: 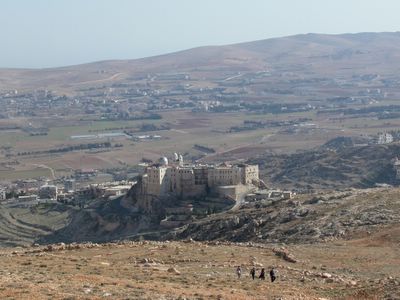 The Convent of Our Lady of Seidnaya (located 27 km north of Damascus and dating back to 547) has an interesting story:

Justinian I, Emperor of Byzantium, came to this desert, where his army encamped and soon suffered thirst for lack of water. When they despaired, the emperor saw a beautiful gazelle off in the distance. He vigorously gave chase, hunting the animal until it tired and stopped on a rocky knoll and approached a spring of fresh water, but without giving the emperor the opportunity to shoot it. Suddenly, it transformed into an icon of Virgin Mary, which shone with a brilliant light. A white hand stretched forth from it and a voice said, "No, thou shalt not kill me, Justinian, but thou shalt build a church for me here on this hill." Upon his return, Justinian related what he had seen to his subordinates and ordered them immediately to draw up a plan for the contemplated church. After some time had passed and the architects were unable to resolve the problems of the plan, the Holy Virgin (the gazelle) reappeared to Justinian in a dream and confided a magnificent plan to him for a convent, of which she would be the Protectress. It is said that the basic structure of the convent follows this plan to this day. The convent soon gained such renown that it came to be ranked second only to Jerusalem as a place of pilgrimage, and nuns from every corner of Syria, Egypt, and other lands flocked to it. (Text from Saidnaya.com)
Posted by Ayman Haykal at 3/27/2005 02:35:00 am 9 comments: 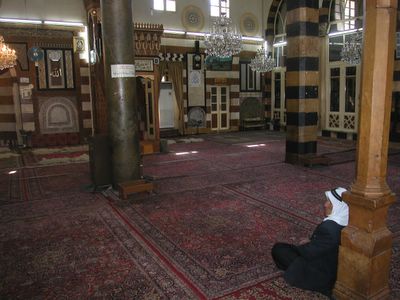 A man waits for the Friday Prayer in the Siba'yah Mosque in Damascus. The Mosque and the Madrassa (religious school) annexed to it are named after Memluk Emir Sibay, who built them in 1515.
Posted by Ayman Haykal at 3/25/2005 03:38:00 pm 5 comments: 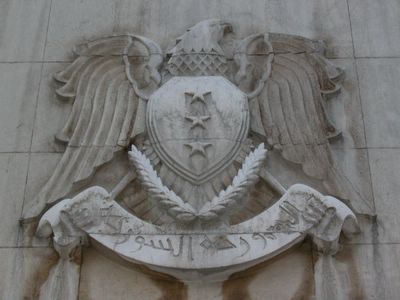 The Syrian national emblem is a reproduction of the Eagle of Saladin. This mediveal Arab hero used a golden eagle as his coat of arms and had it painted on the flags his armies carried during many victorious battles. Other Arab countries have also adopted an Eagle as their emblem, including Egypt, Libya, Palestine and Iraq. This giant eagle is engraved on the wall of the Telecommunications Building in Saadallah Al-Jabiri Street. The shield in the center carries the three stars of the old Syrian flag and the inscription on the ribbon reads "Syrian Republic." This is a bit different from the current coat of arms which has two stars (since 1982) and the words "Syrian Arab Republic" on the ribbon (since 1961).
Posted by Ayman Haykal at 3/24/2005 12:26:00 am 12 comments: 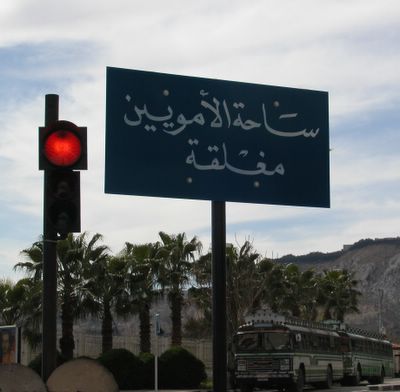 Omayyad Square has been closed to traffic for 4 days now, while construction works are accelerated in the hope of ending a long nightmare for Damascene drivers. It's been three years since the central Omayyad Square was turned into a mess for the sake of a 300-meter-long tunnel that connects Al-Mazzeh and Shukri Al-Quwatli streets. During that period, what used to be Damascus' most beautiful square has been filled with huge construction vehicles, confused traffic police and cars trying to avoid endless holes and humps. Al-Iqtisad Magazine commented: "O-My-God Square" may be a better name.
Posted by Ayman Haykal at 3/22/2005 01:52:00 am 5 comments: 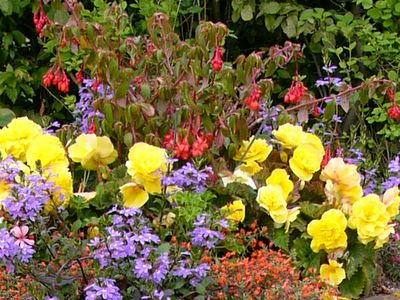 It's a bouquet of flowers and kel seneh wintee salmeh, Mama. "May every year bring you good health, mother" before planting a kiss on her hand and gently touching it to the forehead, as a sign of respect and gratitude. It's resting for moments in her warm embrace and feeling this familiar sweet scent. It's listening to Fayzeh Ahmad's "Sitt Al-Habayeb" (the beloved of all beloved) being repeated on radio all day long, and choking with tears when Fairouz sings: 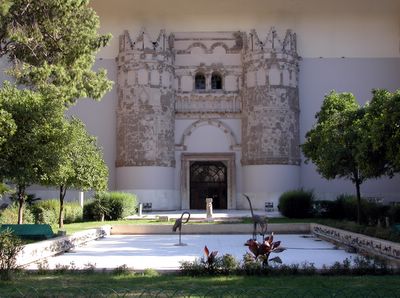 The facade of Al-Hayr Al-Gharbi Palace is one of the most impressive features of the National Museum of Damascus. The palace originally stood 60 km southwest of the ancient city of Palmyra, in the heart of the Syrian desert. It was built by the Omayyad Caliph Hisham Ibn Abdel-Malik in 728 at the crossroads of trade routes connecting Damascus, Baghdad and Arabia. In 1939, the Palace's facade was brought to Damascus and reconstructed, stone by stone, at the entrance of the National Museum. It is one of the rare examples of Persian and Byzantine influences on early Omayyad architecture.
Posted by Ayman Haykal at 3/18/2005 12:07:00 am 6 comments: 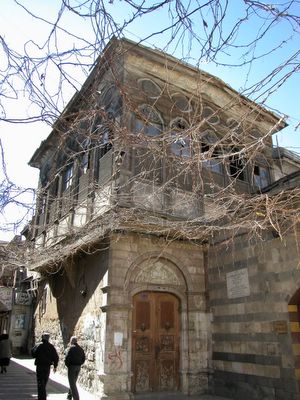 This is where Fakhri Al-Baroudi lived. His house, which is one of the most beautiful in Al-Qanawat neighborhood, is currently being renovated by students of the Damascus University Faculty of Architecture. Al-Baroudi (1887-1966), as well as being a journalist, a politician and an army officer, was known in Syria as the "leader of youth" because he supported and sponsored many youth groups, including boy scouts and several musical bands. He is the author of the famous patriotic song "Bilad Al-'Ourb Awatani" (The Land of Arabs is My Homeland). Today, unfortunately, the words he wrote sound more like a bad joke:

For no border separates us
And no religion divides us.
Our mother tongue unites us
With Ghassan and Adnan**

* Tatwan is a city in Morocco. ** Ghassan and Adnan are names of ancient Arab tribes. Click here to download the song and here to read the lyrics in Arabic. 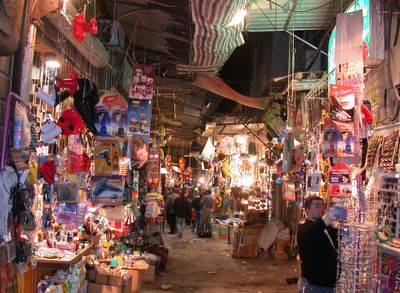 Chinese toys, Syrian-made lipstick, cheap sunglasses, hairdryers, umbrellas, brooms and pens, all make a beautiful festival of colors in a small alleyway near Bab Al-Jabieh.
Posted by Ayman Haykal at 3/14/2005 12:11:00 am 7 comments: 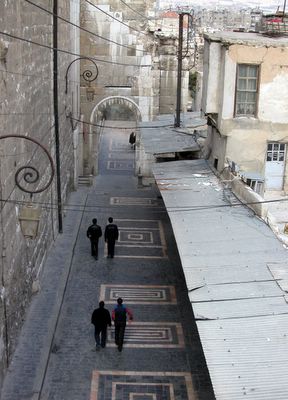 Walking along the Eastern Wall of the Umayyad Mosque before the Friday Prayer.

The Umayyad Mosque stands on a site that has been previously occupied by an Aramaean temple of Hadad, a Roman Temple of Jupiter and finally a church dedicated to St. John the Baptist. When Muslim armies entered Damascus, they established a mosque in the east side of the temple, leaving the Church intact. For more than seventy years, Muslims and Christians prayed side by side inside the walls of the Temple. They used the same main gate as an entrance; Muslims prayed on the east side and Christians prayed on the west side. In 705, the Caliph of Damascus, now the capital of the world's largest empire, wanted to build a huge new mosque and asked Christian leaders to cede their share of the land to him. After long negotiations, the Christians accepted the Caliph's offer to compensate them with four new churches; among them is the famous Mariamiyyah Church (Church of Mary) in Bab Sharqi. 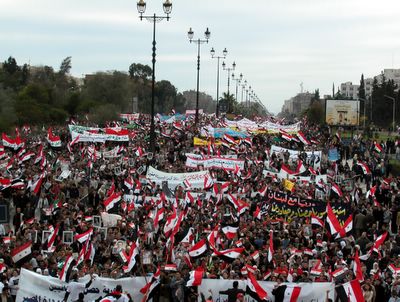 Tens of thousands today crowded al-Mazzeh and 'Adnan al-Malki streets up to the Presidential Office in Rawda to show support for President Assad against the mounting US-pressures. It was noted that unlike previous similar events, the Syrian flag dominated the rally and there were very few Baath Party flags (was this a good effect of the Beirut protests during which only the Lebanese flag was raised?) It was also noted that some people carried small placards saying: "Yes to reform and democracy in Syria" and calling for "Reform.. Democracy... Now!" but adding: "Support Our leader and Make a Better Syria" and "Mr Bush: We Need Our Democracy... Not Yours."
Posted by Ayman Haykal at 3/09/2005 08:22:00 pm 15 comments: 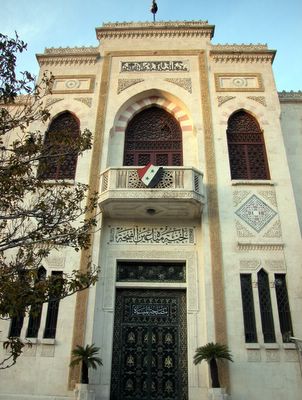 Clean drinking water from Ein al-Fijeh spring was first introduced into Damascus by Governor Hussein Nazem Pasha in 1906. The Committee of Ein Al-Fijeh Water, which was established by politician and national leader Loutfi al-Haffar , started in 1922 to lay infrastructure to deliver drinking water to all Damascus. The project was completed in 1932. The Committee's headquarters in An-Nassr Street occupy a beautiful building that was erected in 1942 and decorated by the beautiful artwork of Mohamad Ali Khayat and calligraphy of Mohamad Badawi Al-Dirani. The script on the top is a verse from the Holy Quran: 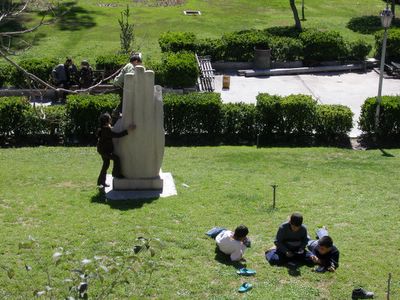 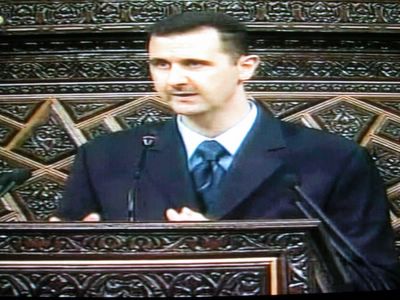 President Bashar Al-Assad addressed the Parliament today about the Lebanese crisis. Assad announced a plan to withdraw Syrian troops to Bekaa valley, as a step towards full withdrawal. When this withdrawal is completed, Assad said, Syria would have fulfilled its obligations under the Taif agreement and UN Security Council resolution 1559. Will this be enough to stop the barking of Bush and others? I don't think so.
Posted by Ayman Haykal at 3/05/2005 11:44:00 pm 2 comments: 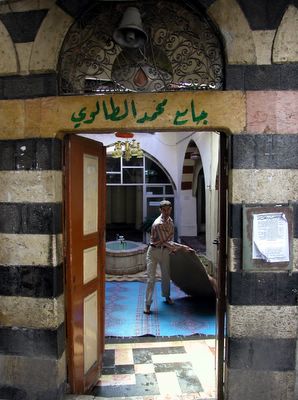 Laying mats in preparation for the Friday prayers in Mohamad al-Talawi Mosque in Qanawat. Before entering a mosque, Muslims take their shoes off, out of respect to the house of God.
Posted by Ayman Haykal at 3/04/2005 03:10:00 pm 10 comments: 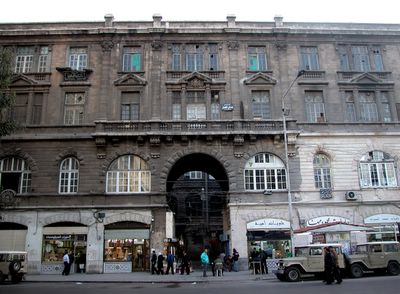 Al-Abed Building is one of the finest examples of early 20th century architecture in Damascus. It was constructed in 1910 by the Spanish architect Fernando de Aranda (1878-1969), who is thought to be the same architect who designed the Hijaz Railway Station. For decades, the building has been victim to the dirtiness and pollution of downtown Damascus. Now it seems to be undergoing a long-waited cleaning action.
Posted by Ayman Haykal at 3/03/2005 02:06:00 pm 5 comments: 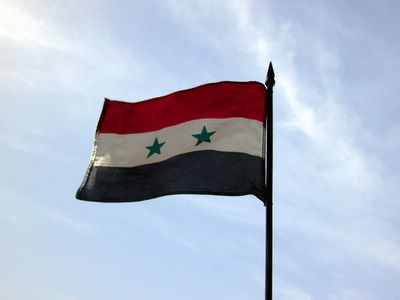 "Those who want to get with the latest US program must put the blame on Syria. What for? Doesn't matter in the least. Whether it is for the two world wars, the demise of Elvis or sinking the Titanic, Syria makes a handy and eminently fashionable punching bag..."

"...This is the reality we must deal with. It's not important to approve or refuse accusations against us. We must read what's behind them; and what's behind them is now obvious: The beginning of an attack against Syria. Maybe we had a lot of differences in the past, maybe we will have lots in the future (...) But Syria will remain our great love. Syria will remain the dream that unites us (...) Let's love Syria, pray for her, defend her. Today Syria needs all her sons, needs us to be her sons, just her sons."