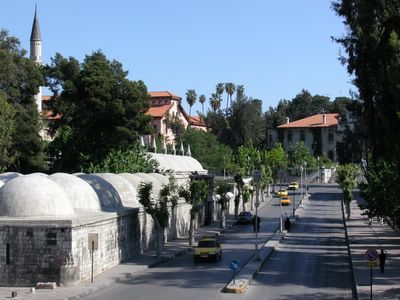 Rida Said Street leading to the Headquarters of Damascus University.

Rida Said (1876-1945) is one of the founders of Damascus University. He studied medicine in Turkey and served in the Turkish Army during the Balkan War. He was the mayor of Damascus in the hardship days of World War I, during which most schools and colleges in Damascus were closed. After the War, he lobbied for the revival of educational institutes in Damascus, and in 1919 he became the President of the newly established Syrian University, the first state-run university in the Arab World. He kept the position until 1936.

The pink building in the background, to the left of the University Headquarters, is that of the old National Hospital (dating back to 1899). A few years ago, it was renovated and turned into a conference center that also carries the name of Rida Said.
Posted by Ayman Haykal at 5/25/2005 01:55:00 am

I always liked this view, a great photo; it shows many periods of history in one scene!

Thanks Ayman
I like the historical whispers that you are giving us ever period of time
in fact .. I'll make you my historical reference !!
or you can say historical directory!

Man i'm really impressed with your pictures, this is a fantastic one, i hope maintaining the old building will take place everywhere in damascus, has anyone noticed the beautifull buildings in Marjeh square hiding under the dusty colour that accumulated over years?

Hey
An amazing blog and great pictures you have here. Keep up the good work.
Pls link my blog here if you think its good.

Rafeed said...
This comment has been removed by a blog administrator.
1:54 am

it is a shame that , the oldest University , and the deeply -rooted , is currently in such miserable situation ... if you do not believe ! ask those who had the chance to fly to the western countries , ask them to make a comparision ask them about the reputation that we have . it is not only the wetern countries , the neighborhood countries like Egypt and Lebanon also .
We were pioneers in many fields .. -syrians- .. but a 40 years of declination and deterioration are enough to make us in the back .

Rida is crying in his grave...

Rafeed u are right ,after 40 years of baathism,the syrian people has lost his dignity and past pride.

my name is Dana Rida Said.I was searching the web,looking for some historic information on my great grand father and I was happy to see the picture of the street.I love this street and the area around the old university.I really hope we'll see major changes in the syrian university and education so that the next generations will have the chance to make a difference in their own country.

I'm a libyan doctor... Thank u for this great work.. and I hope that Damascus will return back stronger than before after getting rid of Baathi gang... Keep up ur great work..

Excellent photo I agree. I so miss Damascus my home city.

Dana, I was actually doing some research as part of my university degree on notable Syrians who played a role in the progress of Syria during the French occupation and your great grand father's name kept appearing as a key personality during that period. Unfortunately, the amount of information about him on the web is very general.
Do you know of any website which has detailed information about him?