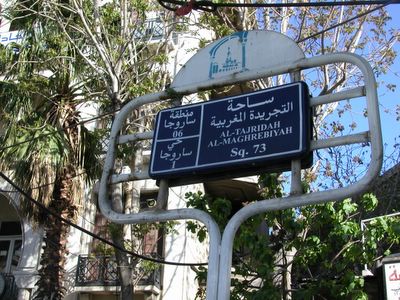 Few people know that official name for Sahat Al-Saba' Bahrat (Seven Fountain Square), a main square in central Damascus, is Al-Tajrida Al-Maghribiyyah (The Moroccan Battalion) Square. A battalion from the Moroccan army was sent to Syria in 1973 to participate in the war against Israel to liberate the occupied Golan Heights. The Moroccans took part in the fiercest battles of the war and lost many soldiers on the slopes of Mount Hermon. In 1974, Al-Saba' Bahrat was renamed in honor of their courageous stand.
Posted by Ayman Haykal at 5/08/2005 11:47:00 am

Despise our borders and our differences we still are brothers and we still belong to the same Umma. :)

What I like in ur posts is that I always learn something new, thank u Ayman for ur nice info.

Sinan, do you mean the Arab Ummah or the Ummah of Muhammad Mustafa (peace and blessings of Allah be upon him)?

that is damascus the heart of arab and islamic nation ...

Readers, what Umma are you talking about? There's no such thing as Umma, the Arab Nation was only a dream and the Umma of Muhammad cannot be confined in a geographically limited space. The morrocans stood on our side because of a cause, the Palestinian one and not because of a belonging. You see some Israeli peace activists that defend palestinians and that are engaged in that cause more than a lot of arabs.

It's time we face reality.

The Arab nation is a reality and the Ummah of Islam is a reality too.
Then I can be an Arab and a Muslim at the same time, and nothing wrong with having many identities.
I am a Muslim, but being a Muslim doesn't forbid me to cancel and ignore everything:
My language, my customs, folklore and history.

And having bad Arab regimes and leaders is not a reason to delete our national identity.

And being an Arab is not a reason to ignore the strong bonds between Arabs and Turks and Kurds; generally between Arabs and their neighbors and the other nations they share the country with. away of policy of course.

And an arab can have a Kurdish roots or Aramaic roots or both!

The reality is: we must get benefit of having such country with several nations and religions instead of trying to ignore this.

PS: None has the right to define in what causes the Moroccans stood with Syrians in the year 73 unless the Moroccan Soldiers themselves.

Amr, can you please give me one thing that defines the Arab Nation you are talking about? Other than the language, I can't find any.

I am not talking about the current regimes. But look at the people themselves, there is no unity or homogeneity among the people of the countries of the "arab" world.
What links the Yemeni to the Morrocan, or the Saudi to the Soudanese, other than the language? NOTHING.

And, of course you can be "arab" and muslim at the same time, but one does not imply the other. Yes, a person can have multiple identies, but in different fields such as a spiritual identity, a national identity, a geographical identity, etc.

What I don't get is how can a person with kurdish or armenian root be an arab? By saying that, you are just denying the person's origin.
Kurds that live in Syria, Turkey and Iraq cannot be all 4 at the same time. A kurd is a kurd, regardless of where he lives.

Man I don’t think that we should describe the word language as “only language”.
You have a sum of 22 countries that decided to make Arabic as its formal language, and the majority of those countries’ citizens are proud to use this language in their daily life.
I’m not saying that we should be one country, which would be pretty dumb in such circumstances. But why should we insist to ignore such important shared bond as the language?
You know that countries as France spend billion of Euros yearly to spread it language and culture world wide, and we just have this on a plate and we effuse to get benefit from it?
Tell me what links an Italian with a Finnish for example?
Why they have to group as one big strong nation and we don’t have to think about it?

But at the same time I didn’t say that we should imply on Kurds to say they are Arabs, all what I said is I’m using Arabic in my daily life communications but originally my gand-grand father is a kurd for example; wht should I say?
I can be proud of my Kurdish roots, but now I’m an Arab.

Being Arabs shouldn’t make us offensive toward other nations; nations as Kurds or Turks, Persians, and Assyrians, have a shared history with arabs, in most of histories periods. And we can not ignore that too.

i did make two mistakes in my last comment:

1- and we just have this on a plate and we effuse* to get benefit from it?
*refuse and not effuse

2-Why they have to group as one big strong nation and we don’t have to think about it*?

*about a part of it.

and i would like to know what you believe in.

I strongly agree with you Amr that arabic, as a language, is a very powerful asset.

In my last comment, I was not attacking the arabic language, but the idea of attachement to an arabic nation.

An Italian and a Finnish have nothing in common, they are part of the European Union that started in the late 1950s because of ECONOMIC needs. It is only recently that the word Union was used to describe the European Union.
Their Union is about economy and defense. France alone cannot stand in the face of the US, China or India. But the European Union as a whole can.

The "arab" culture of Syria is different from the "arab" culture of Algeria, which in its turn is different from the one of Oman. And so, and Arab Nation, based on culture cannot exist, however, an economical union, among arabic speaking countries can exist and I am in favour of that. But if the benefits of such a union are lesser than a union with Turkey, or Europe for example, then forget about the arab neighbours.

We cannot live in the past, the arabs' position XXXX years ago was way different than their position now. So, yes, even if Nasser's ideas were great (which i don't think they are) at the time he expressed them, they are complete non-sens nowadays.

i agree with you inmost of what you said, but i'm against forgetting about arab countries, because when you don't have to deal with them economically, we still need to deal with them in many many other issues, and i think you know what i mean.
despite of language differences, i agree that we and turkye for example have a lot in common more than Sy and Moritania.
thanks for this dialogue that i really enjoyed.
and god bless Syria.

we are many arab countries collectivly establishing one arab nation ,we are one arab nation because we all came from arabia through histery the babelonion,the arameans the asserians the canaan the eygeptian and the peaple of north africa even the Hebrews came from arabia ,all these migrations are semetic and they all adopted arabic,the last and the most popular semetic languege,the turks the kurds the iranian the pakistany adopted the arabic letters to make it easier to read the qoran but they did not adopt the arabic langueg because they are semetic and did not come from arabia like all of us who live in what we call the arab nation,when Islam liberated arab land they spread the religion they did not bring settlers.

one corection to my last note the iranian ,turks ,kurds pakistanies ARE NOT SEMETIC