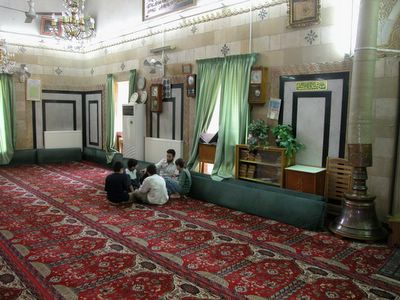 A religious lesson at the Mosque of Ibn Al-Arabi in Salhieh, Damascus.

Muhyiddin Ibn Arabi (1165-1240) is one of the most famous Muslim philosophers. He was born in southern Spain and lived during the golden era of openness and tolerance in Arab-ruled Andalusia. He spent years traveling around the Arab world before finally settling in Damascus, where he completed his greatest book Al-Futuhat Al-Makkiyyah (Meccan Revelations), which is an encyclopedia of Sufism (Islamic mysticism) and Sufi teachings. He was buried in Damascus; and the Mosque, pictured above, was built in his honor by Ottoman Sultan Selim I in 1516.

Throughout his life, Ibn Arabi preached tolerance among all faiths. In one of his most famous poems, he considers his heart "a center of love":

O Marvel! a garden amidst the flames.
My heart has become capable of every form:
It is a pasture for gazelles and a convent for Christian monks,
and a temple for idols and the pilgrim's Kaa'ba,
and the tables of the Torah and the book of the Quran.
I follow the religion of Love:
Whatever way Love's camels take,
that's my religion and my faith.

Is this the small mosque next to An-Nafura cafe, outside the Umayid Mosque?

Without doubt one of the great Awliya as-Saliheen who is held in the same regard as Shaykh Abdul Qadir Jilani, Maulana Jalaluddin Rumi, Imam Junayd al-Baghdadi, Shaykh Ahmad Rifai, Shaykh Bayazid Bistami, Shaykh Khawaja Moinuddin Chishti and many other luminaries of tasawwuf (may Allah's mercy be upon them all).
The extremist, fanatical and narrow minded Najdis who have usurped the Bilad al-Haramayn and invited the neocrusaders there will disagree with the 1st paragraph but in fact the Najdis are the real ahl al-bid'ah!

To anonymous at 5:47
dude, take it easy! seriously!

hey ayman, how are you. Brilliant work you are doing. I am a syrian medical student in the uk. I would like a chance to talk to you about medicine in syria as i am thinking of doing my elective there next year, so please check your yahoo email. salam.

No Sasa, it's in Salhieh in the district known as "Sheikh Mehyiddin". It is where Souk Al-Joum'a (Friday Market) is located, close to Al-'Afif and Al-Mouhajirin.

Firas, sorry for not replying earlier. Please check your email.

Great work u are doing Ayman,,really ur site is such anice and lovely efforts,,,i discovered it by chance and from that time i used to pass through daily,,and also i gave it already to some of my friends here in Tokyo ,,syrians and japanese,,
keep ur efforts and best regards and wishes

I really like Soufism and read about it alot. I found this post great. Also thank you for visiting Day Dreams.

Good poem. I wish we learn more how to love others..When it comes to marriage, and everything..
Forget what sect, or even religion, we belong too and judge, and love people from their behaviour, rather than thinking if they belong to the same "right" religion or sect.

To Steliano Ponticos and others who are interested in Sufism/Tasawwuf and want to read more I can recommend the works of the late Martin Lings (also known as Abu Bakr Siraj Uddin) who passed away last week.

His other works in English are also worth reading especially the Seerah that he has written on Prophet Muhammad (peace and blessings be upon him). This is one of the best available in the English language and has been given many awards in recognition including by the governments of Egypt and Pakistan!

In the the former post of takiyye al suleymaniyeh ,it was a couvent for sufis.

In Arabic what do the 2 words Takiyye and Zawiyya mean especially in the context of Tasawwuf/Sufis? Can somebody shed any light on this? Many thanks!

Takkiya is a couvent for Sufis built during the Ottoman era often for the Mawlawi Sufis .As for the Zawya it's often a modest building or a room inside a religious school or house used by the Qadiriya and Rifa3iya orders.

Thanks Ayman.
Ibn Arabi was undoubtedly one of the best examples of Arab philosophers who always preached peace and tolerance.
Therefore it goes without saying that the west is turning now to great Muslim thinkers such as Ibn Arabi, Rumi and others to better understand the true nature of Islam.
Thanks.

For those who are interested in reading further on this topic there is a VERY VERY DETAILED but excellent article on Shaykh Muhyi al-Din Ibn 'Arabi (may Allah be pleased with him) on the following link:

N.B. the article has a religious and spiritual bias!

AYman..I just finished my exams and I want to thank you for coming when I was away and wishing me lick

thank you for these photos. I've been to Syria in 2001. I stayed not far from al-Hassaké where we were doing archaeological studies (Chagar Bazar, between Hassaké and Qamishli). Unfortunately, I haven't seen to many things in Damascus. Beautiful, oh very beautiful city. All the Syrians I met were kind with me.

I really wish to go there another time.

Be sure, I'll visit your blog at least once a week and add you to my favorites.

"Muhyiddin Ibn Arabi (1165-1240) is one of the most famous Muslim philosophers. He was born in southern Spain and lived during the golden era of openness and tolerance in Arab-ruled Andalusia"

Golden era of openness and tolerance? With the Almohads? Is that a joke?

Beautiful photos on this blog and the words are good too.

Bryant
Check it out --> http://politicalcomment.blogspot.com